Model Overview
The completely redesigned 2007 Altima not only improves handling with its new platform, but it also takes steps toward affordable luxury. Plenty of airbags, Intelligent Key push-button start, and a/c are standard, while Bluetooth capability, nav system, HomeLink, a rearview monitor, and dual-zone automatic temperature control are some of the available options.

The 3.5 SE has a sport-tuned suspension, which means retuned shocks and struts, stiffer springs, and thicker front and rear stabilizer bars. It is also the only Altima offered with 17-inch alloys. Both the 3.5 SE and SL have standard ABS, traction control, and electronic brake force distribution. Electronic CVT is available on the S and SE models, and standard on the SL.

As for the hybrid, the 2.5L, 158-hp four-cylinder engine and 40-hp emissions-free electric motor deliver 42 mpg in the city, with a 700-mile range per tank. Various option packages can add satellite radio, a moonroof, power seats, and a navigation system.

Model Strengths
All New Right Down To The Platform
Lowered Engine For Better Handling
270 Hp V6 Available
Model Changes
Nissan's best seller, the Altima, received a major redesign in 2007, it's first since 2002. The four-door sedan now rests on the all-new "D" platform, the engine has been lowered by 30 mm, the front suspension has been redesigned, all of which has improved the already credible ride. The wheelbase is nearly an inch shorter, but due to interior changes that included moving the cowl and rear glass, the size of the interior and trunk remain largely unchanged.
The Altima continues to offer two engines: the base and S trims have a 2.5L four-cylinder with 175 hp, while the SE and SL models sport a 3.5L V6 that puts out 270 hp (vs. 250 hp for 2006). Both engines have a drive-by-wire throttle, and Nissan's Xtronic CVT with manual mode is available as an option on all but the base trim, which instead is only available with a 6-speed.

New standard equipment for 2007 includes front, side seat-mounted, and side curtain air bags, push-button ignition with Intelligent Key, disc brakes all around, and a one-touch driver's window. The quality of materials has been refined, and the exterior has been freshened as well. Touch-screen navigation, Bluetooth, a rearview monitor, a Bose audio system, HID headlights, and dual-zone automatic temperature control are all now optional equipment. 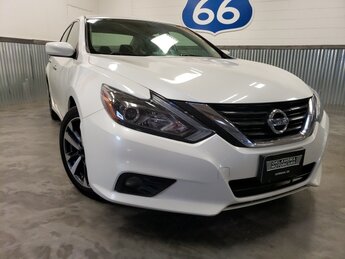